As the ten o’clock hour approached, Deborah strode the same street thinking how free this felt wearing a pair of trousers. Her hair was tucked up beneath a hat, and no one gave her a second glance. For all they knew she was a country

man evading the guard. She approached the wharf and her gaze scanned the area for one of those crannies David had told her about. She slipped into one and stood there silently.

And check out her latest novel “Flicka on the Prairie”

Flicka on the Prairie takes place in the Swedish immigrant town, Lindsborg, Kansas at the turn of the century. Inga Olson Falco is a chef in the neighboring town of Abilene. Hers is a tranquil life, but she always longs for the life she lived in

Lindsborg. When she receives the news that her uncle has died, and her presence is requested at the reading of his will, she learns that his bequest to her will change her life forever and once again enable her to enjoy all of the rich traditions that Lindsborg has to offer.

The Pioneer House – easily the crown jewel of the town of Abilene, Kansas and its surrounding counties. A hotel of impeccable taste and sumptuous cuisine, it is owned by

the beautiful Bridget Edwards, late of Galway, Ireland and her dashing husband, James, a private detective. Such an establishment generates a hundred stories.

Katie At A Crossroads (Shamrock Book 4)

We first met Katie Sullivan Campbell ten years ago, when as a recent immigrant from Galway, Ireland, she had met the love of her life, and the two of them had purchased a

farm on the Kansas prairie and begun raising a family. Now, her life has taken an unfortunate turn and being the plucky lass, we recall, she has settled into her new lifestyle immersing herself into the concerns of her world: The Women’s Suffrage Movement and The Irish-American Club.

Charlie Parker and his wife, Polly enjoy a simple life on the Kansas prairie at the end of the nineteenth century. Their world is filled with county fairs, harvest festivals and horse races.

And along with the good, they are all too aware that death, ravages of the weather, and disabilities of the body and mind lurk around each corner.

A Shamrock on The Verandah (Shamrock Book 2)

The year is 1893. At the age of twenty-six, Bridget Flannigan is sure that life has passed her by, and all she has to look forward to is the drudgery of her position of housekeeper in the home of a wealthy American widow. When her best friend, Olga advises her that she and her fiancé are refurbishing an old hotel and intend to re-open it, Bridget is thrilled for them. But her joy is tripled when they offer her a job as their hotel manager. She jumps at

the chance to re-build her life.

A Shamrock on The Prairie

At the end of the nineteenth century, Katie Sullivan has left her beloved Ireland to take a position as a maid in the home of a wealthy American doctor. Upon her arrival in Kansas, she discovers her new employer is not an ordinary medical doctor, but a patent medicine

The Watermans of Wexford

Mary Charles is the antithesis of the typical young Londoner during the realm of Queen Victoria. Instead of filling her days with teas, needlepoint and the pursuit of the perfect husband, Mary chooses to spend her time at her desk weaving tales of the intrigues and romances of the French court. Her goal in life is simply to become the next Jane Austen. 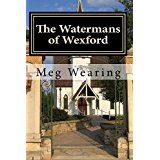 Written by Marge Summers using her pseudonym, Meg Wearing. Find her on the web at amazon.com/author/megwearing.